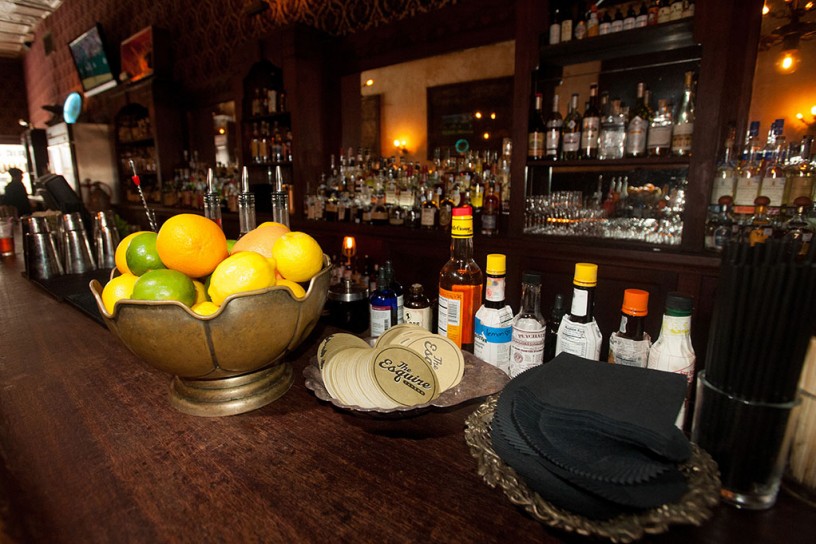 Much has been written about The Esquire Tavern since it re-opened its doors to the public on April 1, 2011, thus holding on to the claim of being ‘The Oldest Bar on the Riverwalk’.

It was in 1933, shortly after prohibition ended that the quintessential downtown icon first opened for business. In spite of its heralded and semi-mythical past, the venerable watering hole had seen better days, before it closed in 2006. It was only a matter of time until ‘someone’ would take-it-on as a project. This someone came in the person of Chris Hill, a homegrown entrepreneur whom before buying the building in 2008, had mostly been involved in real estate development ventures. That is until Hill decided – according to his bio – to become a “’reluctant restaurateur’ who swears that he restored and reopened The Esquire Tavern against his better instincts.” I once joked with Hill that I thought it was instead because of his ‘beer’ instincts, not his better instincts, Ha! In any case, to the delight of many friends and patrons since, Mr. Hill has also recently acquired another iconic San Antonio restaurant (El Mirador). To which I say: “What was that again about being a reluctant restaurateur, Chris?”

The Esquire Tavern features the longest wooden bar top in Texas which, according to its website, is “over a 100 feet of beer-soaked wood rubbed smooth by the elbows of a zillion tipplers”. The bar also boasts of having the original brass foot railing running the length of the bar.

If cocktails is what you’re into, this establishment has assembled an A team of premier bartenders. Under the direction of Beverage Manager Houston Eaves, thirsty patrons can chose to order from a long list of timeless classics or try one of the new summer creations such as the three described as follows on the Esquire’s website.

Ruby Suze: “dry gin, rhubarb bitters, and grapefruit, mixed to produce a citrus backbone enhanced by the bubbles of sparkling wine…. A new twist on the classic Bellini, but not as sweet.”

Desert Bird: made with Bacanora, which was illegal to distill … until 1992, is not a maple-bacon flavored liqueur, but rather distilled Mexican agave nectar that is a nice variation on traditional tequila from the State of Sonora. The flavor falls between the headiness of tequila and the smoky quality of Mezcal. It is combined with a touch of Campari for herbal infusion and a deeper flavor profile, pineapple to sweeten the mix, and a squeeze of lime.

French 75 and Pimm’s Cup: If trying a drink with too many unfamiliar ingredients seems daunting, our bartenders have you covered. A French 75 contains gin and lemon accentuated with champagne for bubbles and flavor, while a Pimm’s Cup is an old English cocktail made with Pimm’s No. 1, ginger ale, cucumber, and lemon. The latter can be mixed with ginger ale (for the beginner) or soda water (for the enthusiast).

The Esquire Tavern also offers some of the best locally brewed suds on tap with something for every taste bud; including San Antonio’s own light and bubbly Shady Oak Blonde from the Branchline Brewing Company; Convict Hill Oatmeal Stout proudly made in Austin by Independence Brewing Company; a creamy stout brewed with roasted English barley, Belgian chocolate and flaked oats or the all-around smooth, well-rounded, versatile Big Bark Amber Lager, brewed with passion by Austin based Live Oak Brewing Company that goes well with everything.

Along with having a superlative array of cocktail offerings, as well as a superior selection of beers, Hill wanted to create a menu that would be atypical from the average bar food offerings while presenting his guests with a high-quality, unpretentious fare. To that effect Hill brought on local talent Brooke Summers Smith as the Executive Chef. Smith is a graduate of the New England Culinary Institute in Vermont. A line on her Bio exemplifies her ‘common sense philosophy about food’ – “Keep it simple, fresh and filled with love … and it will always be good.”

As a footnote, me and Chef Brooke are on a first name basis; which is easy, since I have known her since she was about three years old. In a recent interview, Smith shared with me the following: “I helped create the original menu, It was smaller then with some fried food and a couple salads. Now it has doubled in size and I’ve added some exciting new things, some Mexican selections like Huitlacoche Enchiladas (corn tortillas stuffed with huitlacoche & creamed corn, then topped with huitlacoche salsa, oaxaca cheese, chimichurri & macerated onion); Chicken Mole (mesquite smoked organic chicken, dark mole, candied almonds & creamed corn), and ‘Big Red’ marinated Short Ribs Empañadas (Big Red marinated organic beef short ribs in puff pastry, salsa verde, chimichurri, sour cream & cilantro),” detailed Chef Smith. “Oh! And also a Wagyu Rib Eye,” she added with obvious pride and excitement.

On another recent interview, I asked Chris Hill how he truly feels about becoming a “restorateur”:

Q: Are you happy about the way things have turned out at The Esquire?

A: “Super Happy! I am very proud of what we have achieved in just 3 years. We have received favorable Zagat ratings and mentions in Travel and Leisure and in Esquire Magazine as one of the top 16 bars in the U.S.—I’m darn proud!”

About any future projects he might have coming down the pipeline. Hill replied: “I also bought the building adjacent to the Esquire. It’s known as ‘the old Witte Building’. There are possibilities for several other venues.”

Chef Smith further explained: “We are working on clearing out the basement of the Esquire building which has Riverfront footage. We plan on using that space for special events, parties etc…” She added: “Our kitchen is a ‘Scratch Kitchen’ and we source as much local products as we can. I have a staff of 12 cooks and sous-chefs and we have been together a long time. It’s quite a team.”