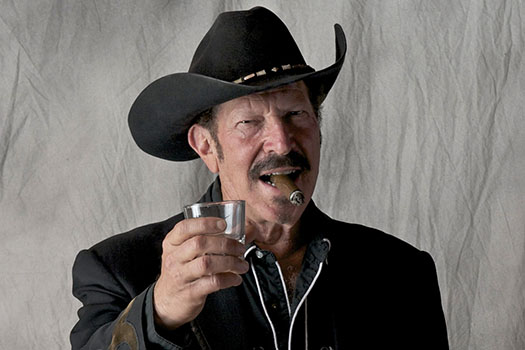 Kinky Friedman wears a cowboy hat, smokes cigars, lives on a ranch in the Texas Hill Country and is a frequent rider in that rodeo known as Texas politics. But it wasn’t until a few years ago that he picked up that quintessential Texas pastime of drinking tequila made by our neighbors to the south. (He famously drank a Guinness while riding in a car as grand marshal in a Dallas parade while running for governor in 2006). Two years ago, he launched Man in Black tequila with a bottle that bears his likeness on the label and two drinks savvy business partners. Writer Travis E. Poling spoke with the wordsmith and troubadour during some downtime from bottle signings, speaking engagements, musical performances and his latest run for Texas Agricultural Commissioner.

CJ: When did you first drink tequila and where?

Kinky Friedman: I don’t remember. The company has been in business a couple of years. But the tequila is great. I didn’t used to drink tequila. Now I drink it cowboy style. You snort the line of salt, squeeze the lime in your own eye, then you do the shot. That’s the way we drink it in Bandera.

CJ: Who first came to you with the idea of doing tequila?

KF: The original “Ass—- from El Paso” (the title of a song Kinky recorded in 1976) Brian Kanof. I’m pretty much the face of the company. The brains of the company would be Brian (in El Paso), probably. At any rate, I started liking this and calling it the Barry Manilow drink, because it makes you feel good for a short period of time, about five minutes. And if you’re an entertainer, that’s great.

CJ: You are known for your love of cigars and have commented on the smokiness of Man in Black tequilas. Does this make it a great pairing, maybe even better than traditional cigars and brandy?

KF: Oh yes, no doubt about that. There’s this misnomer out there that something like Patron is good because they say it’s “smooth.” It’s really very homogenized, very sanitized like the whole country is becoming. Homogenized, sanitized, trivialized. Everything is the same. A suburb of Atlanta, it looks like a suburb of Cleveland or Dallas. If that’s what you want, that’s fine. But just the Plata (silver tequila) – the kind blue collar, working folks drink in Mexico – that is great tequila. This is not your father’s tequila. It’s your grandfather’s gardener’s tequila. It makes me happy, it makes me feel good.

CJ: Out of the gate, Man in Black seemed to be doing well, especially when you would do bottle-signing events. Two years in, is there any sign that it has captured the hearts, minds and the dancing taste buds of the people?

KF: I talked to Tito of Tito’s Vodka. He said the trick is – and he’s been at it 17 years – is to develop a cult audience, people who continually buy it, talk to friends, have it their home. And we’ve got that intention. We’re doing fine with no staff, but it’s poised to take off if somebody wanted to grab it. (He suggests an additional partner could come on board to take it national.)

CJ: Besides the lime and the salt, is there any other way you prefer drinking the tequila?

KF: Well, a Mexican mouthwash-drinking contest can be fun. You know, this a really good tequila. You can drink a lot of tequilas that the more expensive they get the blander they seem.

CJ: You say you are 15 pages in to writing your latest mystery novel “The Hard-boiled Computer.” Will any of the characters be drinking tequila?

KF: That’s a good idea. It’s about time to make an introduction. I haven’t done it yet. I’m still stickin’ with Jameson and espresso, but I certainly could have him drink tequila.