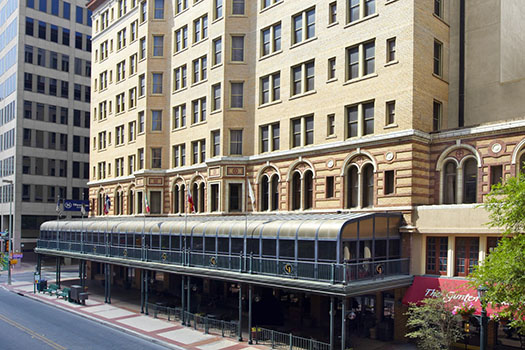 Much has been said about the massive remodeling that was recently completed at the Gunter Hotel. If you knew the grand old lobby before and have not seen the completed work, do yourself a favor and take a stroll downtown. Walk through it, soak in the awesome new brightness, grab some lunch at the freshly redone and re-baptized ‘Market on Houston’ restaurant . You are sure to be awed by the striking and total departure from the previous look and feel; all for the better.

The lobby and restaurant facelifts were finished in March of this year, prior to the arrival of new General Manager Michael Burke who moved here from Houston. His ‘Welcome to SA’ included having to deal with a flood of major proportions in the main ballroom. “Just the carpet alone will cost at least $ 250,000 to replace.” Said Burke. A seasoned pro with over 40 years in the hospitality industry, Burke was brought out of retirement by two of his former protégés who are now partners in ‘Greenwood Hospitality’, a hotel management group which is under contract with the ‘Axle Capital Group’, a Korean interest who purchased the hotel on Nov. 1, 2012. Greenwood Hospitality specializes in managing ‘Signature’ hotels such as the Gunter. Another gem in their portfolio is the ‘Autograph Collection – The Henry Hotel’ in Dearborn Michigan.

“I thought I had retired from the hotel management business.” Said Burke. “I had been running an art-centric non-profit organization (Texans for the Arts), for several years prior to getting the call. Two of my former employees made me an offer I couldn’t refuse. it just goes to show the old adage is true. ‘Be careful who you step on, on your way up.” Added Burke with a chuckle.

With the lobby and the restaurant remodeling done, it was time to attend to one last finishing touch; the bar. The venerable ‘McLeod’s’ having outlived its functionality, a new concept was sought. That’s when a page tied to San Antonio’s history was dusted off the shelves and when the idea for ‘Bar Four One Four’ was born.

Famed Delta Bluesman and Guitarist Robert Johnson came through San Antonio in 1936. His visit was brief but memorable. Few recordings of his music exist but of those, a handful were recorded by sound engineer Don Law in a makeshift studio, in room 414 of the Gunter Hotel on November 23, 26 and 27, 1936. A few months later, on June 19-20, 1937, Johnson laid down several more tracks in Dallas.

From Keith Richards and his long departed bandmate Brian Jones to Eric Clapton, from Bob Dylan to Jimmy Hendrix; from B.B King to Janis Joplin and from bands as diverse as Rush, Fleetwood Mac, the Allman Brothers and Slipknot – all  have praised and given credit to Robert Johnson for having been a musical genius, a pioneer and an inspiration to them. As a footnote, Brian Jones, the original founder of the Rolling Stones and Robert Johnson both died at the age of 27.

It has been documented that Robert Johnson liked to record facing the corner of the room. The reason why, has been the subject of debate. Some think this is a reflection of the fact he was a shy man. Others, such as slide guitar legend Ry Cooder (who was ranked twice as one of the top 100 Greatest Guitarists of all time), disagree. Having spent much time studying American roots music, Cooder believes that by playing to the corner of the room, Johnson was attempting to give his sound an additional measure of fullness, almost as if to create a homemade ‘Reverb Effect’ before its time. Cooder calls this technique ‘Corner Loading’.

The 1,200 Sq. Ft. Bar ‘Four One Four’ will employ four different bartenders, taking shifts. Gunter Hotel General Manager Michael Burke is poised to create some excitement and some fun with some of the cocktail offerings. He said: “We are going to re-create the ‘Speakeasy’ look and feel; serving pre-prohibition cocktails, a lot of brown liquors with at least 20 different types of Single Malt Scotches, Canadian and Irish Whiskies and Bourbons and some old-time specialty cocktails like the ‘Mary Pickford’.”  Burke added: “One of my plans is to have our bartenders compete in a contest to develop their own drinks.” One idea suggested by one of Burke’s friends (LQ), was to create a drink called ‘Corner Loading’.

Johnson’s singing voice was recorded on 29 recordings and 13 alternate takes. They were re-released as a double CD on May 8th, 2011 – the 100th anniversary of his death. Only two takes of his speaking voice survived him, however. On one of them, he can be heard saying, presumably to engineer Don Law, “I wanna go on with our next one myself.”

If few of Johnson’s recordings remain, there are even fewer photos of ‘The King of the Delta Blues’; (only three verified known published photos of him exist). On one of them, he is portrayed with a vintage ‘Gibson L-1’ Guitar. which led to another drink suggestion: T’he L-1’? Over the course of writing this article and researching facts about the life of Robert Johnson, I came-up with a few cocktail name suggestions: The ‘Jackson’, (Johnson made the trek to San Antonio – from Jackson Mississippi). The ‘Don Law’ (The name of the sound engineer who recorded Johnson at the Gunter). The ‘Wanna go on’ (Johnson’s words on a rare recorded voice clip from the recording session where he can be heard saying, presumably to engineer Don Law, “I wanna go on with our next one myself.” The ’8th of May’ – Because of inaccurate records, several different birth dates have been attributed to Johnson. May 8, 1911 is the one that is officially recognized. And finally, the ‘Crossroads’ (Based on the folk legend that Johnson sold his soul to the Devil at the Crossroads of Highways 61 & 49 in Clarksdale Mississippi.

One last cocktail name suggestion: The ‘Greenwood’. Robert Johnson died in Greenwood Mississippi in 1938. Did anyone catch the name of the management company that’s in charge of the Gunter Hotel, at the beginning of this article?

If any of our readers have would like to suggest any other cocktail names, feel free to email them to me at Olivierthewineguy@gmail.com or post them on my Facebook page at Olivier Thewineguy.