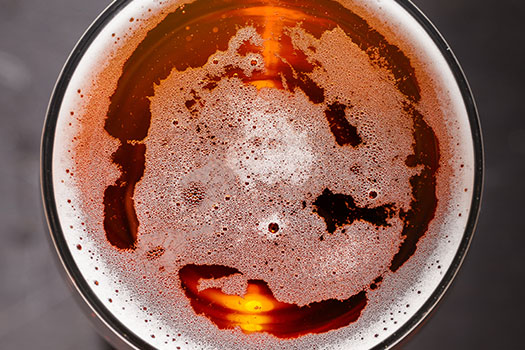 Conventional wisdom for the those who have tasted imported fruit beers or the raspberry beers that were a ubiquitous part of the first wave of the craft brewing renaissance think of beers with fruit as sickly sweet or chemical-factory frankenfruit monsters.

But a new crop of brewers in the San Antonio area and around the country have been working on their knife skills and slicing into fresh fruit for a more nuanced approach to brewing with the harvest of tree and field.
Ranger Creek Brewing & Distilling Co. has made strawberry milk stout for several years now and, for the first time, four-pack bottles are now on the shelves in San Antonio stores. What you get is a rich, roasty stout with the chocolate flavors of the dark malt and a touch of sweetness and aroma from the use of fresh strawberries. To get the effect, Head Brewer Holland Lawrence picks up 500 pounds of the bright red goodies from Oak Hills farm in Poteet, pulls together a crew of staff and volunteers to clean and slice before adding them at two times during the brewing process.

Since it was first brewed in 2012, the beer has been popular at numerous San Antonio Beer Week events in May. The bottles mean it will stick around a little longer. Sure, there’s been a major movement in using fresh and local (when available) ingredients in restaurants and breweries of late, but brewing with fruit really began in the backyards and garages of homes across the city. For years, homebrewers making beer in less risky five-gallon batches have experimented with fresh fruit. Some of them went on to become professional brewers and are scaling up those one-time experiments for public consumption. “I like all kinds of fruit and there are all kinds of flavors,” says Seth Weatherly, founder of 5 Stones Artisan Brewery in Cibolo, a small town just outside San Antonio. “What I don’t like is beer with artificial flavorings. I’m intrigued with the different flavors that can be brewed in.” Like Ranger Creek, 5 Stones uses fresh Poteet strawberries, but in a strawberry blonde ale called Norma Jeane. The Manmosa uses pulverized Cara Cara oranges, a variety he settled on after testing every variety he could get his hands on in the produce section at H-E-B. An addition of orange zest is added to cold side of the process after fermentation. He buys pineapples from a local grocer, who can get him what he needs with a little notice, for the popular Aloha Piña, which also includes an addition of fresh jalapeño. When he first made Aloha, “you couldn’t doubt there was real pineapple in there. I just boosted right out of the glass.”

One of the 5 Stones creations will be featured in June at the Portland Fruit Beer Festival, the only festival of its kind in the country. Up From San Antone, a grapefruit white IPA, was made with more the juice and zest from more than 100 pounds of South Texas grapefruit along with coriander. The small-batch brew was made in collaboration with Widmer Brothers at their brewery in Oregon. “There was a sense of pride that we (Weatherly and the Widmer brewers) juiced all that grapefruit by hand and zested all that fruit by hand,” he says. Next up for the 5 Stone summer release is Frederick Berg, a German Kolsch-style brew with fresh peaches. He has an apple beer in mind for fall and will source the apples from a farm owned by family members in Ohio.

The Southerleigh Fine Food & Brewery opening this fall in the historic brewery building at the complex that once housed Pearl Brewery, will employ a farm-to-table concept in the food and the beers, says chef and owner Jeff Balfour.
“Sometimes chefs have access to some of that stuff and brewers haven’t necessarily gone into that territory yet,” Balfour says. “We kind of know the farmers already and we can introduce the farmers to the brewers and kind of get that going from literally grass roots.” Locke wants to try small batches with tomatoes, agarita berries, Rio Grande Valley lemons and other Texas fruits, but will take many of his cues from the kitchen. “I want the beer to represent what the kitchen is already doing,” says Locke, former head brewer at Branchline Brewing Co. “There’s going to be a lot of interesting ways to utilize fruits and vegetables and whatever else we can throw in and still find my nuanced way of approaching extreme beer. Mostly, though, it’s approachable. There’s no point in making 400 gallons of something that will take six months to move.”