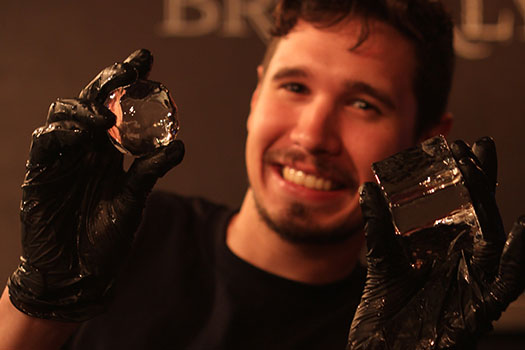 In the wave of opening cocktail bars, two bartenders at Bohanan’s got caught in the artisan ice business, but they’re not sinking.

According to Jake Corney, who co-owns H&C Ice Co. with Andy Hack, it started in the late 2000s in New York when Sasha Petraske opened up a speak easy and made a name for himself. Petraske’s motto is great service and fantastic cocktails with fresh juices and large format ice. He’s most known for his bar Milk & Honey. “It’s like the fire to a chef, it’s how you’re going to make your cocktail cold and the key thing is water dilution,” Corney said. Petraske came to San Antonio and consulted Bohanan’s where Corney was working as a server at the time. They wanted someone who had never tended bar before and asked Corney to make the switch. One of the first things he taught him was that he need to know his ice.

While at Bohanan’s they were already doing large format ice, but they introduced ice balls. They would whittle down a 3×3 blocks into spheres in their spare time and they would be featured in the drinks that cost more than $12. “When we started off we were doing everything we could, chisels, picks, axes, meat cleavers, irons, chain saws, everything to try and get this stuff to work and to be affordable,” Corney said. Customers kept coming back for the ice, asking for another cocktail or if they could freeze their ice for later. It got to the point where they were going through 300 ice balls a day on really busy nights, Corney said. A bar patron came in one day and asked Corney if they could make ice balls for a wedding. Two months and 1,000 ice balls later, it was a huge success with clients demanding more.

Spring 2013  is when things got serious. Hack was fixing to partner with his brother when Corney stepped in and said he shared the same vision. The two paired up and put the endeavour into motion. After saving up  for five months, they bought two freezers, two large chest freezers, and two portable ice chests and began harvesting, slicing and dicing in Hack’s backyard. The duo also bought a bandsaw to efficiently, and accurately make cuts. “The little kinks that you go through starting a business,” Corney said. “It’s pretty nuts, all the techniques we’ve gone through to get to the point where we’re at now.” In the beginning they were purchasing ice from a local ice sculptor, Steven Ahrens, and transporting it Hack’s backyard for processing. After buying so much ice they befriended Ahrens and he offered them space in his studio. Corney said the sculptor never saw them as a threat because he was dealing with creating expensive ice sculptures and they were messing with cubes.

H&C Ice Co. recently helped Ahrens with a piece for the Spurs Championship party. Currently they have 9 a.m. to 6 p.m. work days, with one day solely dedicated to harvesting the upwards of 400 pound ice blocks. They use clinebell machines, each one produces two blocks, and depending on how many days they let it freeze, three to five, the more product, less waste, but heavier the block is. “You cut off the top layer and you’re stuck with this gigantic, freakishly scary to handle block ice block, because that thing will crush you,” Corney said. The top layer is removed because it holds all of the impurities and air that is left over from circulating the water and reverse osmosis, which filters and purifies the water while freezing in the clinebell. After cutting the blocks down they either have cubes, that can become spheres with some chiseling, or spears for tall Collins’ glasses, that are completely clear, dense and last a long time in cocktails. The owners have conducted plenty of tests and found out the advantages of the product they make. “It has all the properties of it’s not going to dilute your drink as quick, it’s not going to melt as fast, it’s going to keep drink chilled longer and it’s aesthetically pleasing,” Corney said. All of their ice is customizable and can be cut to fit specific glasswear. They also make chunks of ice for punch bowls and shot luges, which Corney said are terrible fun and quickly become the life of the party.

H&C Ice Co. supplies ice to the Hyatt Regency Hotel, Bohanan’s, The Esquire Tavern, and The Brooklynite. Delivery is a breeze. They simply load up to portable coolers and depending on the destination cover it with a sleeping bag or dry ice, and the product won’t melt. At the moment they are currently stockpiling ice for current clients as well as trying to dip their toes in the retail market. “It’s a lot of work but it’s fun,” Corney said. “It’s fun to get in the shop and turn on some music and use power tools on ice.”