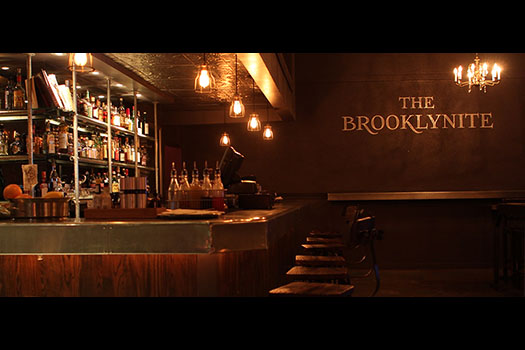 Almost two years ago, The Brooklynite was nothing more than a dream, and would remain unseen until some key investors backed Jerat Pena’s idea. With help from architect and designer Ron Betchol and numerous others, Pena changed the previous “divey, drugged out, nightclub bar” at 516 Brooklyn Avenue into a classy, yet unpretentious place to grab a decent drink without tourist driven prices.

The bar business had been good to Pena, and within a short period of time, and with a little luck, he managed to land a bar that he could call his own.

“It was stupid,” Pena said. “I used to work at Hotel Valencia, and one day the bar manager came up to me and said, ‘You’re the chosen one.’” At 23 years-old, Pena was confused, but took the job and tended bar on the weekends.

It wasn’t long before Pena caught the mixology bug and found himself mixing up drinks at a different hotel. He managed to get hired by the restaurant manager without the general manager knowing… who, for some reason, despised Pena. “Everything was fine and dandy until the GM returned from being out of the country. He saw me and raised a big stink!” Pena said.

Things eventually smoothed over and the general manager gave Pena the task of learning everything he could about tequila and mescal in a month so he could lead a seminar. This seminar would land him an ambassadorship with a tequila company, traveling around the country and learning everything he could from the people he met. Knowledge he would eventually bring back with him to San Antonio.

Pena himself would tell you that he had a large ego when he first started bartending. But when he visited The Anvil in Houston, things changed. “You know, I used to think I was hot shit back when I first started doing cocktails… then I saw Bobby Heugel,” Pena said. Heugel, the owner and proprietor of The Anvil, had a humbling effect on Pena due to his enthusiasm and detail oriented drinks.

“I realized after watching him, and the way he builds his cocktails, and his passion… I was like man, I really don’t know shit,” Pena said.

From there, Pena helped open Bohanan’s Prime Steaks and Seafood, which led to running Le Midi. After nine months there, Christopher Hill asked Pena to run his bar, The Esquire Tavern. The Esquire is home to the longest wooden bar in Texas, at 100 feet in length. It was at The Esquire that Pena would shine.  He received the James Beard Foundation Semi-Finalist nomination for Outstanding Bartending Program Award in 2012 and earned the title of 2012 Austin-San Antonio Rising Star Mixologist.

It was a long road leading up to October 2012, when Jerat Pena would finally get his chance and open The Brooklynite. “It was just at that time when craft cocktails were starting to take over”, Pena said. “Now, it’s becoming a force to be reckoned with.”

The Brooklynite has a seasonal menu, with drinks either being dropped or added coinciding with the rise and fall of outdoor temperatures. Drinks are created collaboratively through Pena’s managing company The Boulevardier Group. “The Boulevardier Group is the backbone of my endeavors from both a creative and operational side.” Pena said.

Pena describes The Brooklynite in one phrase; “A well-executed, creative cocktail program with an emphasis on service.”

Besides the pre-prohibition cocktails crafted with high-end liquors, The Brooklynite also carries wine and craft beer on tap. Their happy hour (5 to 7 p.m.) isn’t too shabby either. For $5 you can get an Old Fashioned or their signature, self-titled drink, The Brooklynite.

It’s just a classy cocktail joint along the river, where service and speed take precedence. When you sit anywhere other than the actual bar, a server tends to your needs and provides you and/or your group with water bottle service, which is infused with strawberries.“

“I’m really happy the way it all came out. I was happy.” Pena said. “I mean… I’m never really, ever happy… catch my drift?”